Good Cop, Bad Cop: what do we actually know so far?

Written by Tan Strehler-Weston on 8 Nov 2021 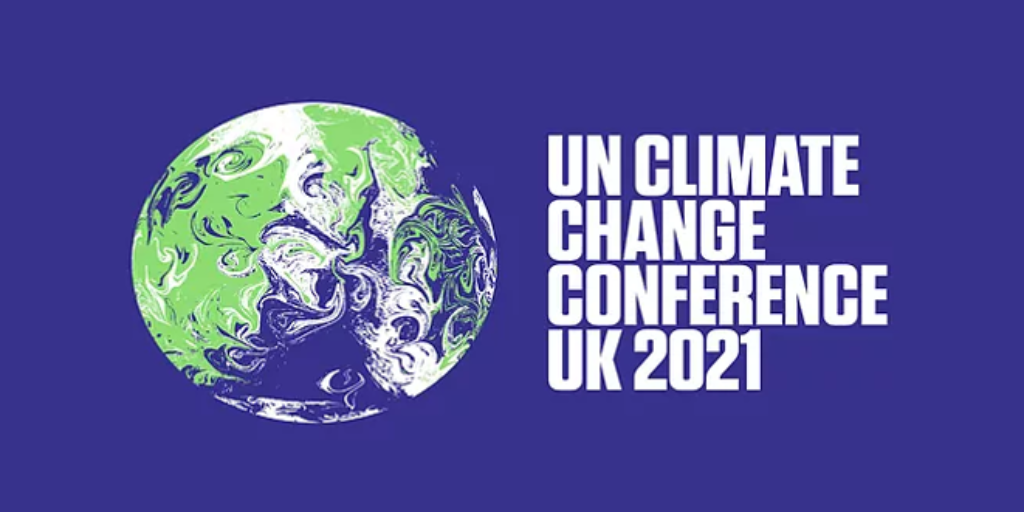 It’s difficult to believe, after years of anticipation and, frankly, desperate hope, that COP26 has already reached its halfway mark.

The two-week summit is taking place in Glasgow under the watchful gaze of the historic Finnieston Crane, a powerful symbol of the city’s industrial heritage, and of a world economy in urgent need of modernisation and change. 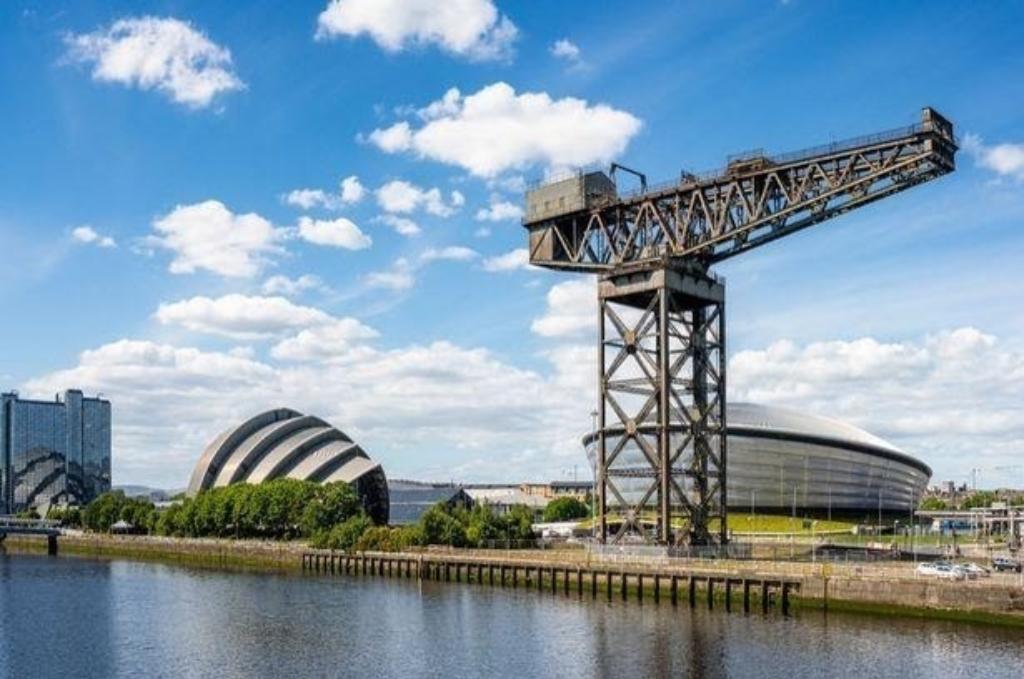 The conference itself is now in full swing, with a flurry of visiting world leaders and numerous announcements hitting the headlines.

But how is COP26 actually going so far? Well, the truth is, that we currently know everything and nothing.

It’s most helpful to think of COP26 (and all other COPs) as two parallel conferences.

The first COP is the one we see on the news every day, with its activists, global leaders and announcements concerning various climate-related issues. The programme for this first COP is well publicised – with days dedicated to transport, climate finance, energy, transport, gender and many more.

But the second COP happens behind the scenes, throughout the whole event. At core, its objective is to get all the world's nations to agree to binding emissions reductions, in order to halt the climate crisis. The current urgency is to halve global emissions by 2030, and establish a pathway which limits warming to 1.5 above pre-industrial levels.

Think of the first COP as containing the individual jigsaw pieces, and the second as representing the big picture of our global response to the climate crisis.

Both are vital to our planet’s future, but so far we know everything about how the first COP is going, and almost nothing about the second. Intrigued? Let’s take a look…

It’s clear that the world’s nations and businesses are more engaged with the climate crisis than ever before. And this is reflected in the general response to COP26.

The green agenda dominated the G20’s Rome summit – before COP26 even officially began. Numerous world leaders then descended on Glasgow. They were led by an enthusiastic President Biden, marking a welcome step change in the USA’s engagement with climate issues. The President even went as far as publicly criticising the leaders of Russia and China for their non-attendance. Political leaders were joined by the likes of Greta Thunberg, Sir David Attenborough, Elon Musk, Jeff Bezos and numerous companies and NGOs (including a large delegation from the oil and gas industry…). 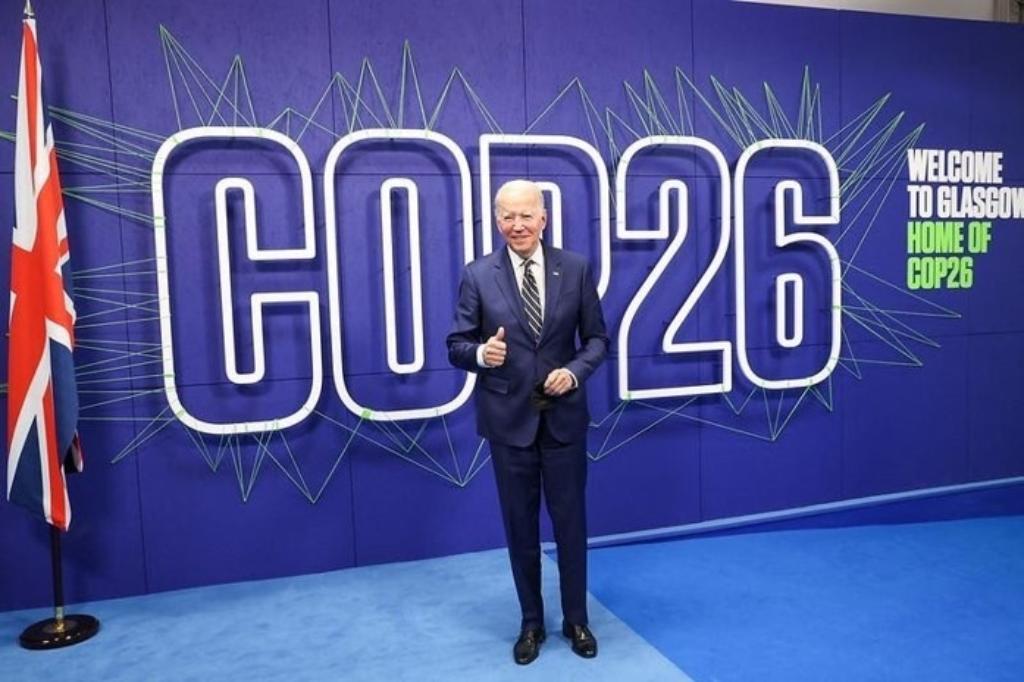 And we’ve since seen a series of exciting thematic announcements and commitments on various issues, including:

The big coal phase-out: 23 countries agreed to stop using coal and to phase out existing coal power stations. This may not seem like a huge number, but it includes some of the world’s largest coal users, such as Germany, Poland, South Korea and Indonesia. Phasing out coal is enormously positive, because there is really no worse way to generate electricity. It emits twice as much CO2 per unit of electricity generated as gas (itself a very dirty fuel), and 75 times as much as wind!

Ending deforestation: Countries accounting for 85% of the world’s forest cover have pledged to end and reverse deforestation by 2030. Trees constitute a major CO2 sink, and can be crucial to supporting biodiversity. Importantly, the agreement includes Brazil, where the Amazon rainforest has seen mass deforestation, largely as a result of farming, over many years. A similar international commitment in 2014 lacked the support of key players such as Russia and China, as well as Brazil – but they are all on board this time. This year’s agreement is also backed up by significant pledges of funding for indigenous communities, tackling wildfires and helping developing countries restore degraded or destroyed forests.

Businesses obliged to commit net zero targets: The UK government has announced that larger businesses will need to set out their own net zero plans, establishing clear targets and the steps that will be taken to meet them. This is an enormously important step, and in years to come businesses will probably wonder how they ever did without such strategies. At Thrust Carbon we can help organisations of all sizes reduce their emissions, create ambitious net zero goals, and track progress towards them over time, using carbon budgets and industry-leading data and tools.

While the sorts of agreements outlined above are positive – and we really should see them as key pieces of the COP jigsaw – the fact is they only address issues in isolation and with select countries taking part.

For example, there are doubts about whether the plan to halt deforestation is workable – although funding and the roles and rights of indigenous people are outlined in the agreement, it’s not clear whether it goes far enough in these areas. And when it comes to coal, the US, India and China are yet to formally agree to phase outs.

This is why the second COP - focussed on setting the top level, country-by-country emissions targets is so important.

COP - rather dryly - stands for ‘Conference of the Parties’. As the name hints, it is all about consensus. It has to be. Unless all (or almost all!) the world’s nations publicly agree to binding targets for greenhouse gas emissions, there is no way to predict or track our impact on the climate, and plan accordingly.

As COP26 progresses, officials and ministers from various countries will be negotiating behind closed doors to find emissions commitments which both work politically at home and do enough to contribute to global emissions reductions. As is well known, negotiating positions will always vary – the US and China will have different interests and views from each other and from the numerous ‘Small Island States’ sitting at just above sea level.

It’s likely that negotiations will take place overnight and into the very final hours of COP26 before we know the outcomes.

So while we won’t find out more until later in the event, what’s clear is that the climate is in a very precarious position. We need a huge success at COP26.

Global temperatures are already more than one degree above pre-industrial levels, and rising. The image below demonstrates just how much of humanity’s emissions have occurred since 1990, and how unsustainable the current situation is. 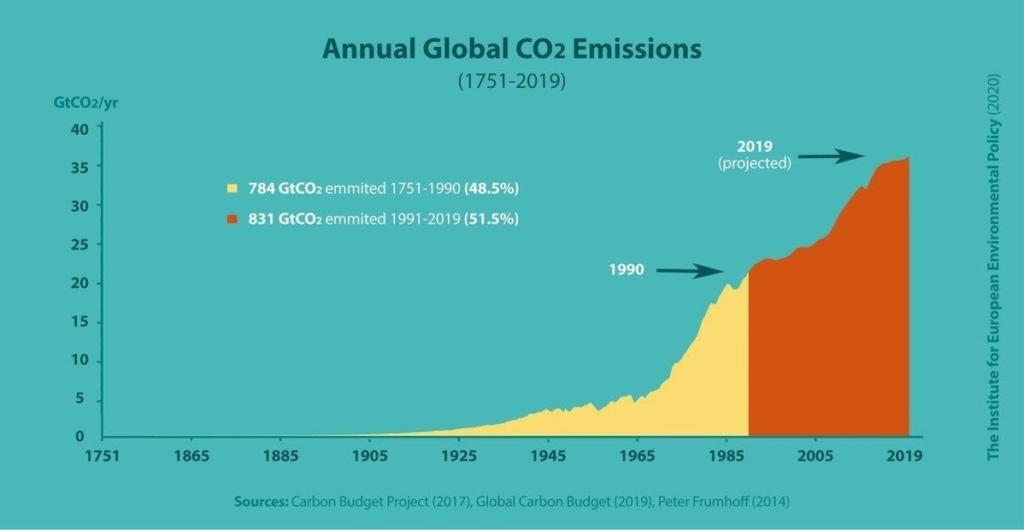 So what is the goal for the second COP26? What’s the big picture here?

Central is the consolidation of the landmark Paris Agreement, a legally binding climate treaty signed at COP21 in Paris. Here, nations agreed to limit warming to 2°C, and ‘pursue efforts’ to limit it to 1.5°C.

The UK government’s stated goal is therefore to “set the tone for the next decade to keep 1.5C alive”. While this may not seem ambitious, the below graph shows why this is in fact a hugely important undertaking.

Even with all currently-pledged future climate policies and funding, the world is on course to significantly miss that 1.5°C goal, and unless rapid progress is made soon, it will become virtually impossible to achieve as the amount of CO2 in the atmosphere steadily builds up.

It’ll be vital that all nations use COP26 to dig deep to find additional carbon savings, and commit to them. 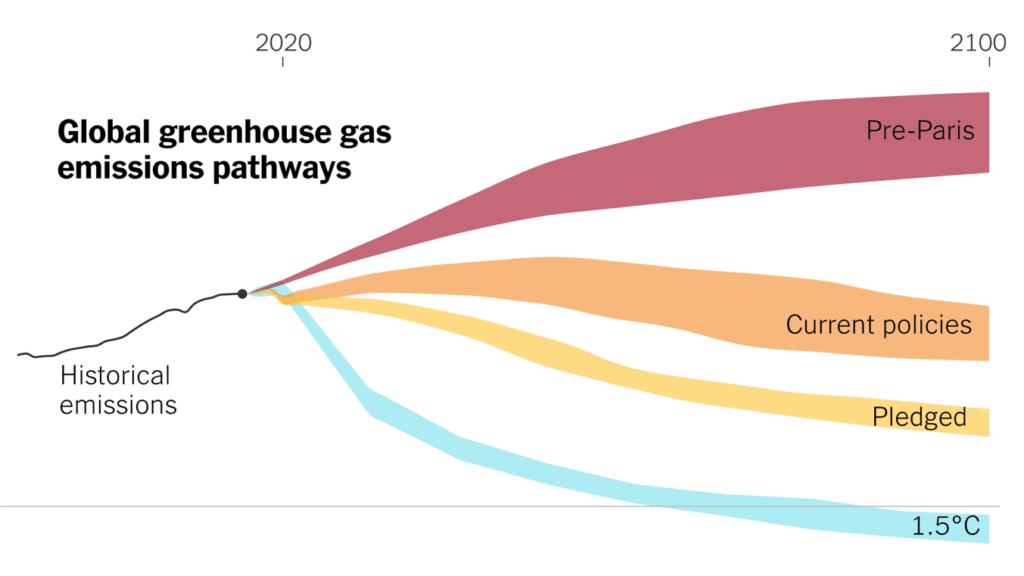 So there you have it. The landscape is far more complex than it might seem, with two COPs effectively taking place in parallel. This means we currently know everything and nothing about what has been accomplished.

This is fairly normal halfway through a COP. And viewing the individual achievements so far with a cautious glass-half-full attitude would certainly be reasonable.

But limited agreements on the individual jigsaw pieces are no substitute for an ambitious big-picture agreement on national emissions limits. That’s what counts, and what we should all be waiting for. Our message to the negotiators is clear: be ambitious, and be precise. There is less room for ambiguity than ever before, and time is running out.

Written by Tan Strehler-Weston on 8 Nov 2021